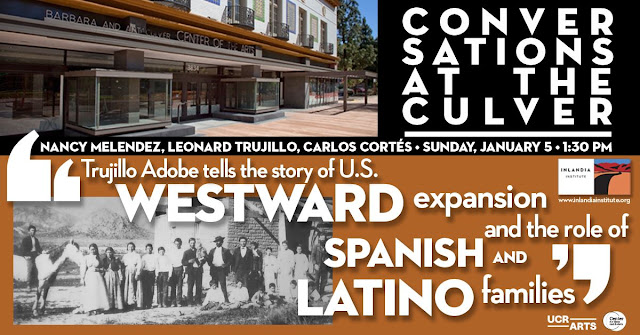 Inlandia Institute invites you to celebrate and learn about our area’s Native American connection and our genízaro pioneers, Sunday, January 5, 1:30 pm at the Culver Center.

Find out about the life and times of genízaro pioneers of La Placita/Agua Mansa, Alta California, Mexico, known today as Riverside and Colton, California, USA!

Who were genízaros? Why did they come to Alta California? What were they hoping to accomplish? How did they get here? Why here and not someplace else?

Learn about the Trujillo Adobe historical site, plans to restore it, and re-ignite the old Spanish Town settlement. Jot down your questions and join this illuminating conversation!

Dr. Carlos Cortés is a nationally known and award-winning author, teacher, consultant and speaker on a wide variety of issues related to diversity, multiculturalism, the impact of media, and cross-cultural understanding. He is Professor Emeritus of History at the University of California, Riverside. He served as the Creative/Cultural Advisor for Nickelodeon's award-winning children's television series, "Dora the Explorer" and "Go, Diego, Go!”

"Sometimes we become so distracted by national and world events that we overlook the historical dramas in our own backyard. It's nice to be able to participate in an event that brings our own local history to life." —Carlos Cortés

Leonard Trujillo is a direct descendant and a third great grandson of Lorenzo Trujillo & Maria Dolores Archuleta who settled in the San Bernardino Valley of Alta California in the early 1840’s. As a direct male descendant, Leonard was able to confirm through Y-DNA testing the Indigenous ancestry of his Trujillo family line in New Mexico. Freed by retirement, Leonard volunteers to help individuals trace their ancestry. He currently serves as president of the Southern California Chapter of the Genealogical Society of Hispanic America.

“And there were the intriguing stories of my paternal ancestors from New Mexico who established the first settlement in Riverside, California in the 1840’s and were described as Native Americans.” —Leonard Trujillo
at 4:56 PM