The San Diego Hispanic Saturday group met on 20 May 2017 at 10am at the San Diego FamilySearch Library in Mission Valley. Carlos Yturralde arranged the meeting at the Family Search site. We had 13 in attendance. 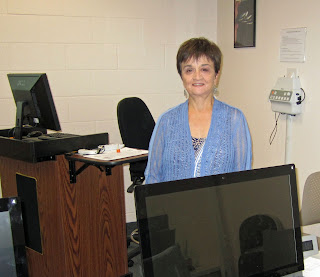 The speaker for the day was Stella Cardoza (left). She talked about all her years of genealogy research and her family history book “Esquer Family Chronicle 1600-1800”. Her family is from Alamos, Sonora, Mexico. She has traveled to Alamos in search of family genealogical records. She has also traveled to Mexico City to research records at the Archivo General de la Nación and to Spain to research records at the Archivo General de Indias. She printed 100 copies of her family genealogy book for her family members. She is now working on a book about her genealogy research that she plans to publish and sell. Her presentation was extremely interesting because of her extended genealogy research. 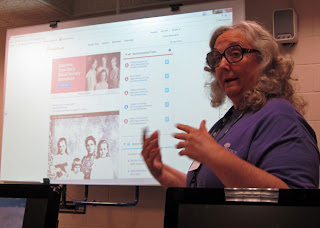 All in all, it was a very informative day.

GSHA-SC is letting our members know if you are not able to attend any of the sessions that SCGS Jamboree provides, here is one way to hear and see some of their Jamboree Sessions. If you are able to attend, drop on by to see us at the vendor table where we will be assisting members on hispanic research.

Registration is NOW OPEN for
live streaming of 14 Jamboree sessions!

Southern California Genealogy Society is very grateful to their Diamond Sponsor, Ancestry, for underwriting Genealogy Jamboree Live Stream. With their generous support, SCGS is once again able to bring you 14 hours of high-quality family history education free of charge.

The live streamed sessions from Jamboree are listed below. Session descriptions, speaker bios, suggested experience levels and schedule details are available on the Jamboree website.

The Jamboree streaming video is FREE, but you will need to register to view the broadcasts. They encourage you to register in advance so there is no delay when you want to view the sessions.

The live-streamed sessions from Jamboree are listed below. Session descriptions, speaker bios, suggested experience levels and schedule details are available on the Jamboree website.

11:30 a.m. - 12:00 p.m.
SA027 Sources of Genealogical Research for Armenians in the Caucasus
Presented by Camille Andrus


Not able to watch live? No Problem!

If you can't watch a session in real-time as it is being live streamed, you will be able to watch it at your convenience before midnight, July 10, 2017, on the Jamboree Registration & Viewing Portal (not to be confused with the SCGS website and the Extension Series Webinar archives available for SCGS members).

Registration for the Genetic Genealogy pay-per-view and free Jamboree sessions will remain open through July 10, 2017.

Jamboree live streaming is FREE and available to the public, but viewers need to register. We highly encourage you to register in advance.

Wrap up on DNA Presentation 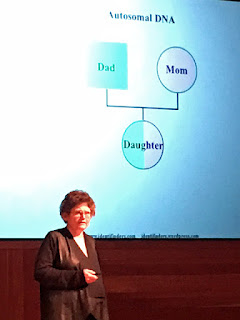 Our feature speaker, Colleen Fitzpatrick, PhD, is an internationally recognised forensic genealogist, the founder of Identifinders International.  She explained in her presentation that she has been involved in high profile forensic cases, including the identification of the Unknown Child on the Titanic and the Amelia Earhart project; and that she is now the Forensic Genealogist on the Abraham Lincoln DNA Project.  Colleen told that she has also been a key member of team that have exposed three international Holocaust literary frauds. Colleen's collaborations include the Armed Forces DNA Identification Laboratory, the US Army Casualty and Mortuary Affairs Office, the Simon Wiesenthal Center in Jerusalem, the University of Arizona, Harvard Medical School and other noted professional organizations. She is a Fellow of the Society of Photoinstrumentation Engineers (SPIE), an Associate Member of the American Academy of Forensic Science (AAFS).

Her presentation brought conclusion to two recent cases where she was able to identified an adoptee's mother based upon handwriting that was marked out by the county registrar office and the solving of who a mother was after a suicide and the techniques of tree triangulation. The mother's background was of deceit and lies that were establish after her death. 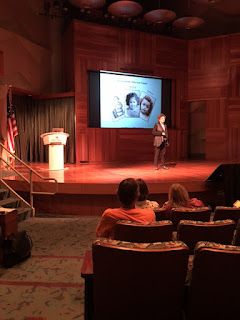 As a world traveler and multi-lingual, Colleen specializes in international cases; she has researched in over 50 countries. Colleen assists nonprofits, military organizations, attorneys, and law enforcement with cold case work, forensic identification, and with locating hard-to-find individuals. She has developed innovative DNA identification techniques that have benefited Child Survivors of the Holocaust and adoptees who otherwise would have given up hope of finding their birth parents.


Colleen lectures widely in the US, Canada, Europe, Australia, and New Zealand.  She has appeared in hundreds of domestic and international newspapers and magazines, and on international radio and television programs. These include the BBC World News Tonight, RTE Ireland Television’s Nationwide, Radio New Zealand, CNN, NPR’s Talk of the Nation, More Magazine, Scientific American, The Wall Street Journal, Publisher’s Weekly, The Boston Globe, The Melbourne Sun, The Denver Post, The Seattle Times, and The Orange County Register.  She is the author of three books:  Forensic Genealogy, DNA & Genealogy, and The Dead Horse Investigation:  Forensic Photo Analysis for Everyone, which were available to purchase after the meeting. Here is a photo where she was personalizing with her signature. 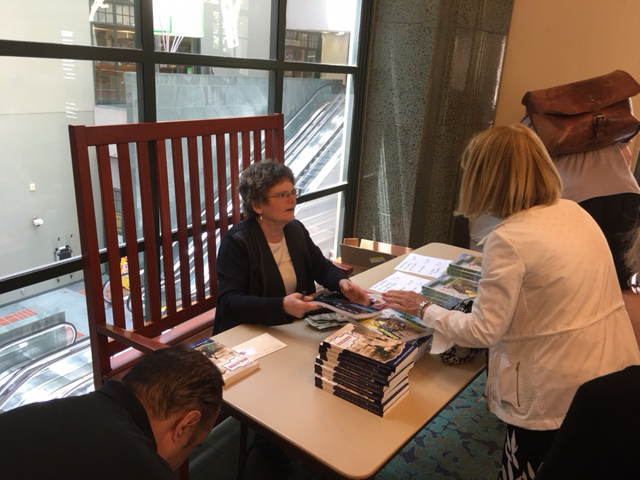 Come join us for a special presentation to Genealogy Garage on May 20, 2017 hosting by GSHA-SC, LAPL and SCGS.

RSVP: No RSVP required for this Genealogy Garage.

Description: Today, forensics are more popular than ever thanks to television shows like CSI and Forensic Files. Solving mysteries by analyzing evidence, investigating DNA connections, and uncovering secrets that no one wanted discovered…sounds a lot like genealogy!

Come meet Colleen Fitzpatrick, PhD, a real-life Forensic Genealogist who has worked dozens of cold cases nationwide, was involved in the identification of the “unknown child on the Titanic,” and is currently involved with the Abraham Lincoln DNA project. Colleen will speak to us about some of the cases she has worked (and even solved!) by using an innovative blend of forensic and genealogical tools that were unavailable in the past.

Learn why forensic genealogy is one of the most interesting new aspects of solving the mysteries of how we’re connected—after all, John or Jane Doe in a forensic case has to be someone’s long-lost relative, right? It’s up to the forensic genealogist to connect the dots!
at 9:51 AM

The next meeting of the Hispanic Saturday group is 20 May at 10am at the Family History
Center in Mission Valley (4195 Camino del Rio South). It is at the far east end of Mission
Valley. They have parking on the east side of their building.

Carlos Yturralde has arrange for us to meet at the Family History Center and he will give a tour of the facility. We will first meet in their class room and Marie Cardoza, a member of the researcher group, will be speaking to us about her research and her book. Afterward, we will have the opportunity to use the computer lab and do some researching on your own.
at 2:23 PM

Saturday, May 6, 2017, was a well attended meeting GSHA Southern California Chapter of 35+ members and friends eagerly listened to Aaron Magdaleno's presentation: "Marriage Records 1728-1775, Nuestra Señora de Guadalupe, Paseo del Norte". Below are just a few photos of the event. We have placed links to his web site under "Recommended Websites" under "Research in the Internet" When time and technology allows us we will post an audio rebroadcast of his presentation. 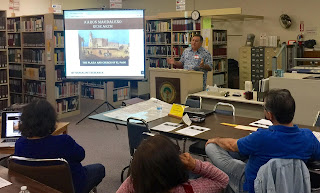 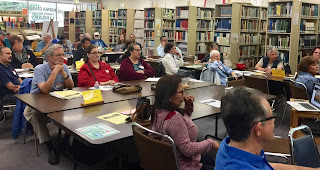 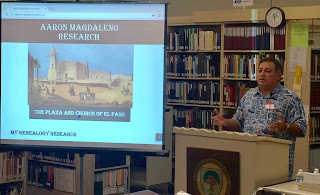 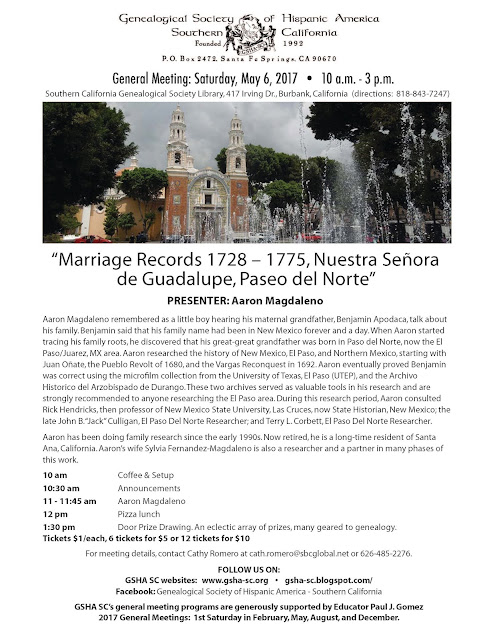 Please join us at our General Meeting on Saturday, May 6, 2017 from 10 am to 3 pm in Burbank at the Southern California Genealogical Society location at 417 Irving Drive, Burbank, California.

Our General Speaker, Aaron Magaleno, will give his presentation on his research about New Mexico, El Paso area and Northern Mexico. It will be well worth your presence for the information and guided power point presentation if you have ancestors from the regions, as well as those who may have migrated north from other states. Lunch will be available for a small fee if you wish not to miss the networking after the meeting.
at 4:18 PM

A Message from the GSHA-SC Board

Dear GSHA-SC members and the general public: Our chapter and society as a whole has been struck with a crisis that every person in the world has had to experience. We hope you and your families will be given the strength to weather this unwelcome tide of events. Since our meeting space at the Southern California Genealogical Society in Burbank will certainly be closed until the end of the year or beyond, we will not have access to our Hispanic reference books or monthly Hispanic Research Days in person.

However, we are planning to have virtual meetings using GoToMeeting or Zoom. When we schedule meetings, they will be promoted with Facebook, email blasts and in some cases, mailed notifications.

We hope you will have patience with us as we work through this transition. You matter to us. Thank you.

GSHA-SC is a 501(C)(3) non-profit California corporation #33-05894533, a non-profit group maintained purely by volunteers, as such we donate some our funds to benefit the awareness of preserving history, teaching our members and non-members how to do genealogy and promoting genealogy where and when we can. In the past, we had helped organization, such as Hispanic Heritage Project in scanning old documents to preserve history and we helped underwrite Genealogy Garage at the local Los Angeles Public Library, where they promote all types of research in areas of genealogy. There have been others throughout the many years this organization has been in existence. Past records of donations can be reviewed, if requested.